Botryosphaeria stem blight of blueberry a concern in Southeast

Pathogen enters the plant through wounds and causes rapid death of individual canes and entire bushes. The disease is especially severe on 1- and 2-year-old plantings of susceptible cultivars. 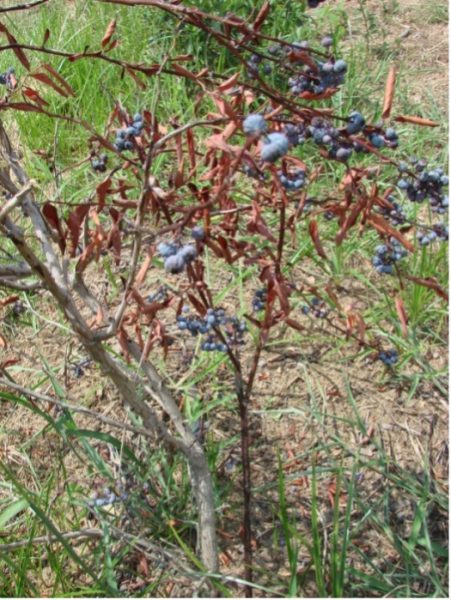 The most obvious disease symptom of Botryosphaeria stem blight in a blueberry field is called ‘flagging.’ Typically, affected stems do not drop their leaves, resulting in a brown-leafed ‘flag’ (Figure 1). A further diagnosis could be performed by removing a wilting blueberry stem that has both dead and healthy portions and cutting the stem longitudinally.

A Botryosphaeria stem blight-infected stem will have a uniform, light brown discoloration in the wood extending down the infected side of the stem. Generally, Botryosphaeria stem blight infections become evident in June, and new infections can be observed throughout the summer months. Infections are usually associated with a wound caused by mechanical damage or insect damage, or can be related to late-season cold injury on succulent shoots that occurred during the previous growing season. Infected stems quickly wilt and die. The infection can also develop in wounds at the base (crown) of the bush in susceptible cultivars, resulting in rapid plant death without the typical flagging symptom associated with infections on individual stems.

The Botryosphaeria fungus overwinters in dead and infected blueberry stems. The disease also occurs on many other wild and cultivated plant species, which contributes to the survival and spread of the disease. Spores are carried by wind and rain from infected stems to wounds on healthy plants. These spores germinate and invade the host, causing a brown discoloration of the vascular tissue of the plant, which extends up and down the stem from the infection point, and eventually kills the stem.

Management of this disease depends on cultural methods since no chemical sprays can effectively control the disease.

Pruning to remove infected stems is the best method of reducing the disease pressure. Pruning removes infected stems from bushes, preventing eventual death of the plant, and reduces the number of spores released in the field. Pruning can be done anytime infected stems are observed, but care should be taken to cut well below the infected area. After a stem is cut off, examine the cut end of the remaining stem. If any brown areas are visible in this cross-section, the cut must be made again further down the stem until all infected tissue is removed. Otherwise, the disease will remain in the stem and continue on down to the crown, possibly killing the plant. Infected prunings should be removed well away from the field and burned or shredded.

Fertilizer management is critical to prevent formation of succulent shoots late in the growing season. Infection of cold-injured shoots around the base of the bush is a primary means by which this fungus enters blueberry plants. Fertilizer should not be used after mid-summer, especially on young bushes.