Georgia’s wine industry is growing, bolstering the North Georgia economy by increasing the number of tourists to the area as well as attracting side businesses attracted by the wineries, University of Georgia faculty told members of the Georgia House Rural Development Council recently.

“There’s an influx of growth in this area,” said Bruce Cutler, director of the UGA Small Business Development Center office in Gainesville. “New vineyards are being established every year. They are also creating a ripple effect, because they impact other businesses as well, such as food, lodging, tours—anything related to hospitality.”

The most recent economic impact study of the wine industry, conducted by the UGA Center for Agribusiness and Economic Development at the College of Agricultural and Environmental Sciences, showed that Georgia wineries and vineyards contributed $81.6 million to the state’s economy, created more than 600 jobs and generated more than $4.1 million in state and local tax revenue. But that study, based on data collected in 2012-13, doesn’t include wineries that have begun operating since then or the side businesses that have emerged.

The center is collecting new data and hopes to have a report out this year.

“The advice the SBDC provided me was very helpful,” Ernst said. “They advised me on funding for vehicles, and with that knowledge I was able to structure the rest of my business.”

Since the wine tours began on Labor Day 2013, the company has added three buses, three tour employees and an office manager. The company was profitable after a single year. Today, sales are in the six figures. The White County Chamber of Commerce named Ernst as Entrepreneur of the Year in 2014 and VIP Southern Tours earned a Trip Advisor Certificate of Excellence in 2016 and 2017.

“Travelers are booking their vacations around vineyards. There’s been a real influx in that in the last year,” Ernst said. “More and more people are calling us to assist with their entire vacation stay and learning about the vineyards and what the region has to offer. They are making the trip to the vineyard their priority and planning the rest of the stay around that.”

“The (2013) economic development study done at UGA has done a lot to help us. It was one of the first steps to forming Georgia Wine Producers,” Lykins said. “We needed help from UGA, with plant variety and how to grow certain species.

“We’re growing by leaps and bounds, adding five to 10 new wineries a year. UGA understands the industry,” he said.

In concert with the other vineyards in North Georgia, in 2015 Lykins launched the Georgia Wine Producers, an organization dedicated to representing the statewide industry in legislative affairs. The Georgia House of Representatives rural study committee heard about the positive impact that UGA is having on the growing wine industry. Two years ago, the General Assembly created and funded a viticulturist in the College of Agricultural and Environmental Sciences to work with the wine makers. Viticulture is the science, production and study of grapes. 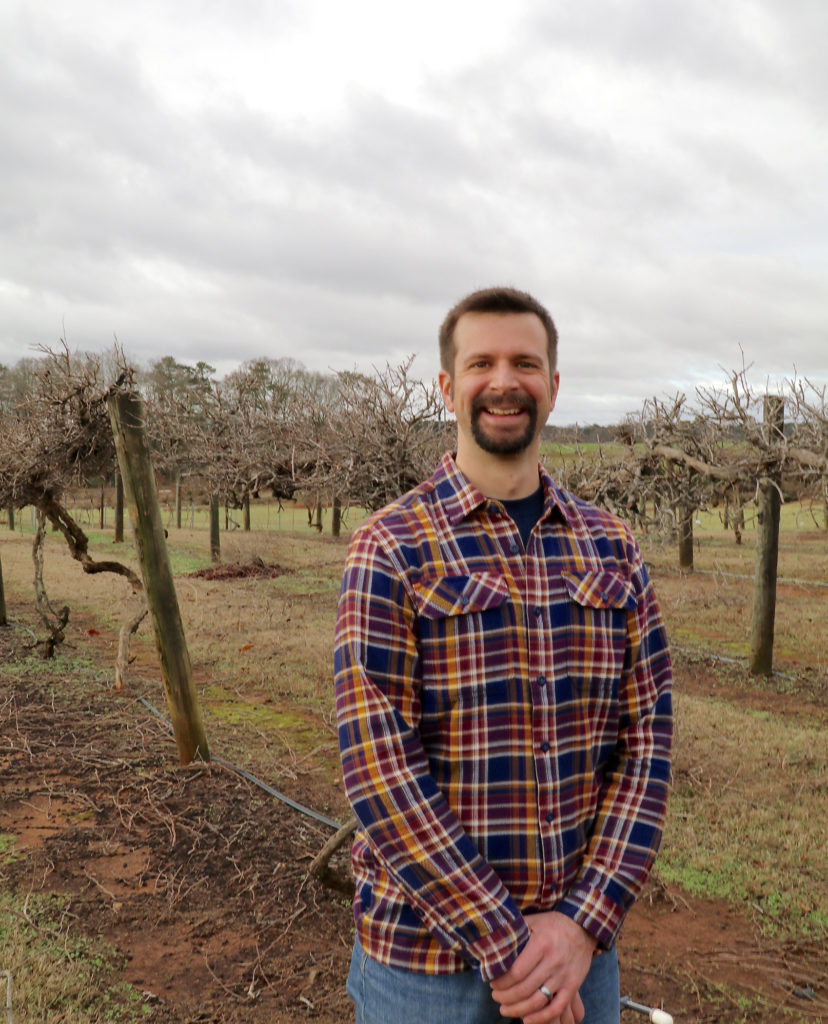 Viticulturist Cain Hickey, an assistant professor and UGA Cooperative Extension specialist, grew up in Pennsylvania in a town “with more wineries than stoplights.” He has made a career of studying viticulture and the agrarian processes of growing wine.

It is not easy to grow grapes for wine in Georgia, he said. The hot, humid climate makes the grapes prone to fungal diseases.

“On top of that, we have highly variable growing seasons,” he said.

But those committed to the effort can make a go of it, as he’s seen with the proliferation of vineyards and wineries in North Georgia.

“People fall in love with growing grapes,” Hickey said. “You plant something, you take it off the vine, you go through this century upon century old process of winemaking. You get to sell a product of your own soil. People take pride in that.”

Lykins, a former swimmer at UGA who holds three degrees from the university, planted his first vines in 2008.

Hickey recently was in Cortona, Italy, visiting vineyards. The vines there look just like a vine growing in North Georgia, he said.

“The issues they face there, with centuries of practice, are some of the same issues we face in Georgia,” Hickey said. “If they can do it, we can do it.

“I am very confident that this industry can succeed,” he said.

In addition to his work directly with North Georgia wine growers, Hickey heads a team of UGA Extension agents and specialists who are dedicated to providing this burgeoning industry the best support possible.

In June, the SBDC held a Wine Business Conference to convene leaders in the wine industry for the purposes of networking, education and information-sharing. The conference took place on June 6 in Dahlonega, in the heart of Georgia’s wine country.

The College of Agricultural and Environmental Sciences and UGA Extension also assist vineyard and winery owners through the Journeyman Farmer Certificate Program for new and aspirational farmers. The SBDC is a partner in the program and Cutler, Hickey and other UGA Extension specialists and agents cover the many facets of farming, from cultivation to marketing and business planning.