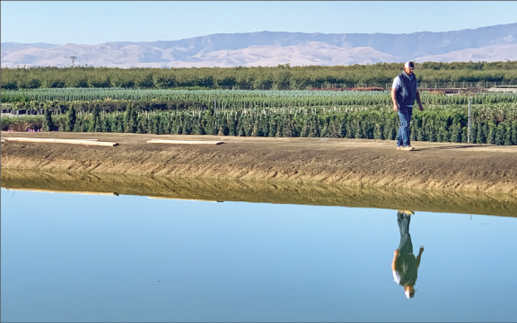 A proposed California ballot initiative, which could appear before voters in November 2022, seeks greater state investment to increase the annual supply of water in California by 5 million acre-feet.

The Water Infrastructure Funding Act of 2022 is now being circulated for signatures. It proposes to allocate 2% of the state’s general fund – currently equal to about $3.5 billion per year – for projects that increase California’s water supply.

The measure has just fewer than 180 days to gather the necessary number of signatures from California voters to qualify for the ballot.

If passed by voters, the initiative would permit as much as half of those funds to be used to finance large water-supply projects immediately.

Projects eligible for funding include the development or expansion of facilities for groundwater cleanup and storage and stormwater capture. It would also fund surface reservoirs and water conveyance, water treatment and recycling as well as desalination of seawater or brackish water.

The measure additionally promises to fund water conservation programs to achieve as much as 1 million acre-feet of the total objective of 5 million.

Assembly member Devon Mathis, R-Visalia, is gathering endorsements for the measure from a bipartisan list of state legislators. Twenty-six lawmakers recently joined Mathis in signing a letter of endorsement.

“We support this initiative to improve our aging water infrastructure and to construct new means to capture and deliver water to all parts of the state,” read the letter circulated by Mathis. “The funding allocated within this proposal will ensure the state achieves water resilience and adequately provide, clean, safe and affordable drinking water to all Californians.”

An Oct. 15 Legislative Analyst’s Office report estimated that the costs of implementing projects to produce reliable supply of 5 million acre-feet of water could average between $2.5 billion and $4 billion a year. Over time, the report said, the costs could top tens of billions of dollars, potentially totaling more than $100 billion.

The report said the measure could result in lower water bills for Californians and unknown savings for local governments.

Mathis called the measure a “first-of-its-kind ballot initiative,” adding, “We set the goal based on our state’s current and future water needs, set ongoing funding for a diverse set of eligible project categories and placed a sunset for when the goal is reached.”

California Farm Bureau director of water resources Danny Merkley said hundreds of stakeholders from every region of the state were asked to review the draft initiative and offer suggestions for improving the language before it was finalized and submitted to the California attorney general on Sept. 28. He said the measure includes language protecting and honoring area of origin water rights.

“Farm Bureau reviewed the draft and identified areas of concern for different regions of our membership but has taken no position on the initiative,” Merkley said.

The organization may take a position later, he said, if the Farm Bureau Water Committee makes a recommendation to the Farm Bureau’s Board of Directors.

California still hasn’t built projects approved by voters in the last major water bond. In 2014, voters passed Proposition 1, which called for investing $7.5 billion in storage and other water projects for people, food production and the environment.

Proposition 1 also dedicated $2.7 billion for investments in public benefits required for water projects. Those benefits, to be overseen by the California Water Commission, included spending on ecosystem protection and restoration.

As part of the process to fund public benefits, the commission approved maximum conditional eligibility determinations, or the amount of bond funding available, for seven proposed projects and is receiving screening information for new projects.

Existing projects and screening projects must meet a statutory deadline of Jan. 1, 2022, after which a project will not be eligible for funding if certain conditions are not met. More information the proposed water initiative for 2022 may be found at morewaternow.com.