International Center for Agriculture and Biosciences International (CABI) scientists have made the first discovery of the Asian samurai wasp Trissolcus japonicus – a natural enemy that kills the eggs of the the invasive fruit and nut pest brown marmorated stink bug (Halyomorpha halys) – in Europe.

Judith Stahl and Tim Haye led an international team of researchers, including those from the University of Turin and the USDA Agricultural Research Service, who used DNA analysis to confirm the wasp – which is native to China, Japan and Korea – was found in Switzerland in 2017.

In the paper ‘First discovery of adventive populations of Trissolcus japonicus’, published today in the Journal of Pest Science, the CABI scientists outline how – after a survey of native egg parasitoids of the brown marmorated stink bug – they discovered theTrissolcus japonicus was already present in apple orchards in the Canton Ticino, southeastern Switzerland.

Stahl and Haye confirm that the wasp is now established in Switzerland, that it was found in two consecutive years at three different sites, and that it is the first time it was recovered from exposed H.halys egg masses in Europe.

The brown marmorated stink bug is a global pest which in 2016 caused $60m worth of damage to Georgia’s hazelnut (a third of its crop) and in 2010, $37m worth of apples were destroyed in parts of the USA. CABI is leading the fight to see if Trissolcus japonicus can be used as a natural enemy to control the pest.

Accidentally introduced Trissolcus japonicus populations were also found in the north-eastern USA in 2014, and the wasps is now spreading throughout the country. It is known to search for hosts on trees and CABI is also conducting experiments in China to see if if attacks brown marmorated stink bug eggs in field crops. 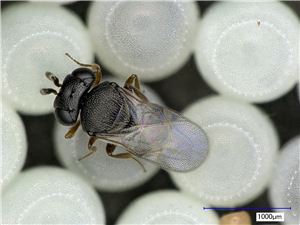 In 2017, Stahl and Haye conducted the first set of laboratory tests, exposing egg masses of native European stink bugs to Trissolcus japonicus under quarantine conditions. The aim is to see if the wasp can be an effective and safe biological control method to fight the brown marmorated stink bug if released in Europe.

Haye said, “It is difficult to say for certain how Trissolcus japonicus arrived in Switzerland – the 2mm big wasp was probably accidentally transported from its native range along with the pest.

“But whether Switzerland was the actual country of introduction or whether the wasp was introduced into the climatically highly-suitable northern Italy before spreading northwards remains unclear.”

Haye added that while it is too early to evaluate the impact of Trissolcus japonicus on invasive brown marmorated stink bugs in Switzerland, based on the very high parasitism levels of H.halys eggs observed in Asia, its establishment could have the potential to reduce invasive stink bug densities below economic thresholds.

Haye said, “Further research is needed to determine the current distribution and spread of Trissolcus japonicus and to evaluate how egg mortality may affect the H. halys populations and native non-target  stink bugs in the near future.”