When insects, weeds, animals and diseases enter California from elsewhere in the nation or world, they can cause economic losses to agricultural crops and ecological damage to the state’s natural areas. Ultimately, invasive species affect every resident of California.Based on historical data, a new invertebrate species establishes itself in California about every six weeks, on average. They don’t all become serious pest problems, but many evade eradication efforts, disrupt carefully balanced integrated pest management programs, hijack sensitive ecosystems, and spoil valued recreational resources and urban landscapes.

The UC Integrated Pest Management Program and the Center for Invasive Species Research are two UC ANR programs that monitor invasive species and coordinate responses when they become established in the state. They work closely with UC ANR advisors and specialists on eradication, management and prevention of these threats.

Asian citrus psyllid and huanglongbingHuanglongbing disease, which kills citrus trees, is spreading in Southern California residential areas and threatening commercial citrus production. There is currently no cure for the huanglongbing disease. It is spread by the Asian citrus psyllid. The insect, a native of Pakistan, Afghanistan and other Asian regions, was first detected in California in 2008. Currently the only way to control the disease is to reduce the psyllid population and to remove trees that are infected or located near the infected trees. Everywhere ACP is found, the pests find and spread HLB. In California, an aggressive push to keep psyllid populations low, regulations to limit the spread of psyllids when trucking the fruit, and active scouting for and removal of HLB-infected trees in residential areas could buy time for researchers to find a solution before California suffers the fate of Florida citrus growers, whose orange production has dropped 70% lower than 20 years ago. More info: ACP/HLB distribution and management.

Brown marmorated stink bugThe first reproducing population of brown marmorated stink bug was found in Los Angeles County in 2006. In 2013, a large population was detected in a midtown Sacramento. A pest of agricultural crops and a serious residential problem, it is a strong flier and also travels long distances by hitching rides in vehicles or inside furniture or other articles when they are moved, often in late summer and early fall. As a result, new infestations pop up in neighborhoods where people travel from infested areas. A native of China, Japan and Korea, BMSB was first documented in the United States in Pennsylvania in 2001. It is either established or found occasionally in about 41 states. More info: Pests in Gardens and Landscapes – Brown marmorated stink bug 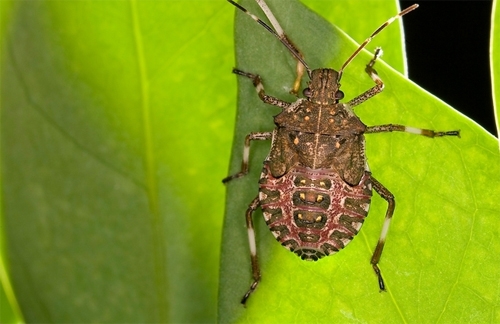 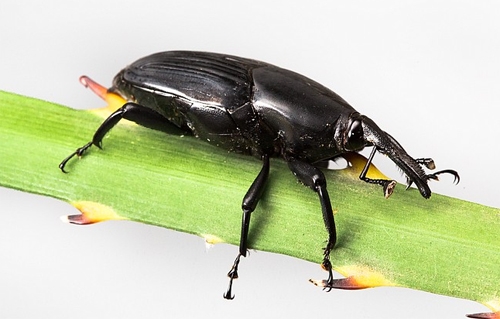 The insect, originally from Asia, was first identified in California in 2012. Shot hole borers bore through bark carrying with them harmful fungus. The fungus attacks the tree’s vascular tissue, choking off water, causing branch dieback and eventually killing the tree. Polyphagous shot hole borer and the fungus are now distributed widely in more than 110 types of trees in Los Angeles and Orange counties, and have been observed in San Bernardino, Riverside and San Diego counties. More info: Invasive shot hole borers 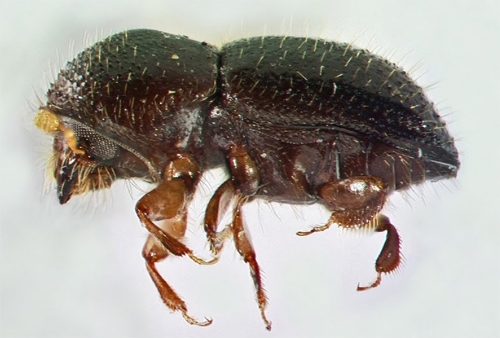 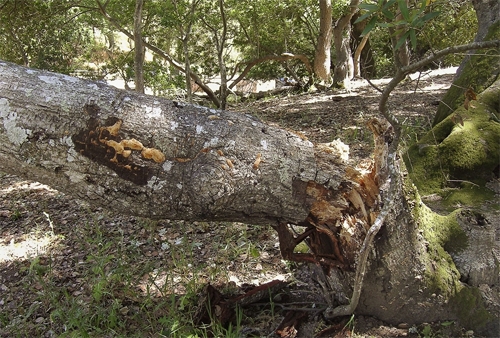 Dyer’s woad is an invasive weed thought to have been introduced into California in the Scott Valley of Siskiyou County, where it is locally referred to as “Marlahan mustard.” Until a couple of decades ago, it was primarily confined to Scott Valley, but it has subsequently spilled over into Shasta Valley. It continues to spread throughout Siskiyou County and into Modoc, Shasta and other northern California counties. During medieval times, Dyer’s woad was one of the most valuable plant commodities in Europe, cultivated as a source of blue dye as early as the 13th century. Colonists first introduced it to the eastern United States for that purpose. UC ANR researchers are developing management practices for removing Dyer’s woad and using solarization to kill the seeds in the field, limiting the risk of seed being spread when dead weeds are removed for disposal. More info: UC IPM Pest Note on Dyer’s Woad 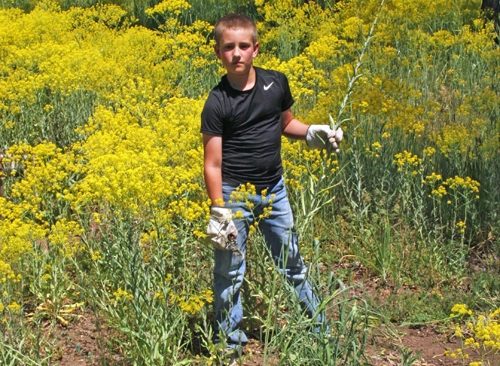 Yellow starthistle is native to Eurasia and was introduced to California around 1850 via South America. Recent reports indicate that yellow starthistle infests between 10 and 15 million acres in California. It is common in open areas on roadsides, rangeland, wildlands, hay fields and pastures. Disturbances created by cultivation, poorly timed mowing, road building and maintenance, or overgrazing favor this rapid colonizer. It forms dense infestations and rapidly depletes soil moisture, preventing the establishment of other species. It is also poisonous to horses, causing a nervous disorder called “chewing disease,” which is fatal once symptoms develop. Horses are the only animal known to be affected in this manner and should not be allowed to graze on yellow starthistle. More info: UC IPM Pest Note on yellow starthistle 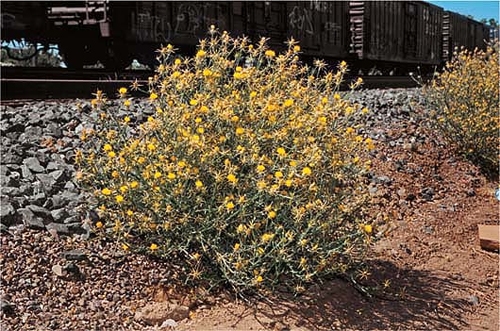 Saltcedar is native to Eurasia and was introduced into California through the nursery industry. The weed is tolerant of high salinity. Saltcedar’s dry branches and leaves can increase fire frequency. After fires, saltcedar sprouts rigorously, while native trees and shrubs generally do not, enabling saltcedar groves to push out native species. Research shows that saltcedar could impact the structure and dynamics of streams by trapping and stabilizing sediments, increasing overbank flooding following high flow events and creating permanent sand bars in rivers. This pest also contributes to the decline of wetland communities as habitat refuge for wildlife. More info: Center for Invasive Species Research 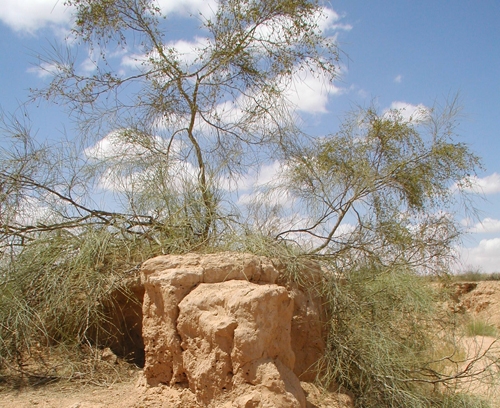 Arundo donax is native to the Mediterranean and tropical Asia. In California from the late 1700s to early 1800s, giant reed was often planted for erosion control in flood channels and as wind breaks. The bamboo-like perennial can grow to 25 feet tall with thick, well-developed rhizomes. It develops dense stands that displace native vegetation, diminish wildlife habitat, increase flooding and siltation in natural areas and create a wildfire hazard. More info: Arundo donax 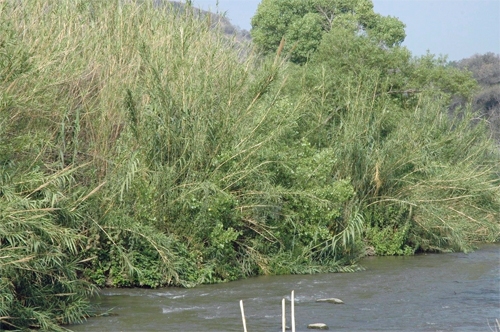 Egyptian broomrape was found in a California processing tomato field in 2015 – a first find for the U.S. It is a parasitic plant that attaches to other plant roots and lacks conspicuous leaves. Broomrape can infest about 30 broadleaf crops, including bell pepper, cabbage, carrot, celery, eggplant, melons, potato and tomato. The presence of broomrape in a field may force farmers to plant a less economical, non-host crop or to leave the field fallow. The weed causes reductions in crop yield, adversely impacts crop quality and results in the loss of cultivated land due to reduced crop alternatives. More info: Egyptian broomrape. 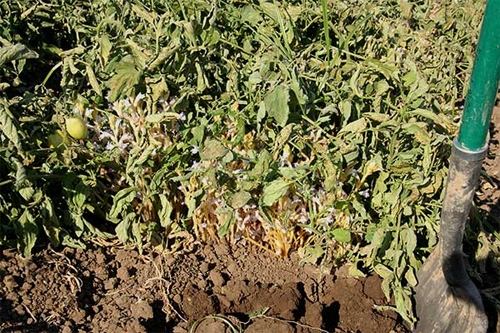 There are several species of dodder native to California, but they are not as difficult to manage as Japanese dodder, which was identified in Shasta and Yuba counties in 2005. This invasive plant pest has thick stems that resemble spaghetti. It grows larger and faster than native dodders and can cover entire trees or shrubs. In California, no viable seeds have been observed following Japanese dodder flowering. Instead, most spread occurs through the dissemination of small pieces of stems distributed by birds and other animals or through pruning, composting, and the improper disposal of infested plant material. This weed is has spread to more than a dozen California counties including Alameda, Butte, Contra Costa, Fresno, Los Angeles, Merced, Sacramento, Shasta, Solano, Sutter, Tulare, Yolo, and Yuba. Contact your county agricultural commissioner to receive proper identification and help with control. More info: UC IPM 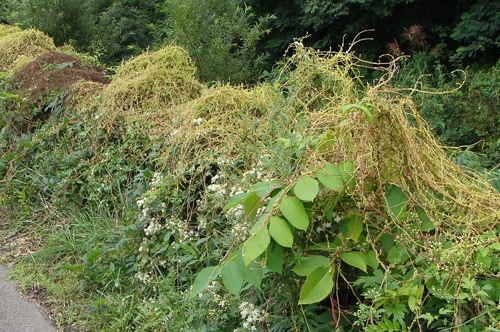