Last May, a Turlock almond grower noticed nearly all the nuts on a row of trees in his orchard had fallen to the ground.

“It looked like we shook this row,” he said. “I was scared. I thought the whole orchard was going to go.”

UCCE Integrated Pest Management advisor Jhalendra Rijal, who serves Stanislaus, San Joaquin and Merced counties, determined the cause was an infestation of brown marmorated stink bug (BMSB), an invasive pest from Asia. For years, BMSB had only been found in urban areas of California – most notably a 2013 infestation in midtown Sacramento.
With few natural predators and a wide host range – including apples, pears, cherries, corn, tomatoes, grapes and a variety of landscape trees – the population eventually moved into agricultural areas, first appearing in crops in 2016 in Stanislaus County. Rijal has been doing BMSB research since then. 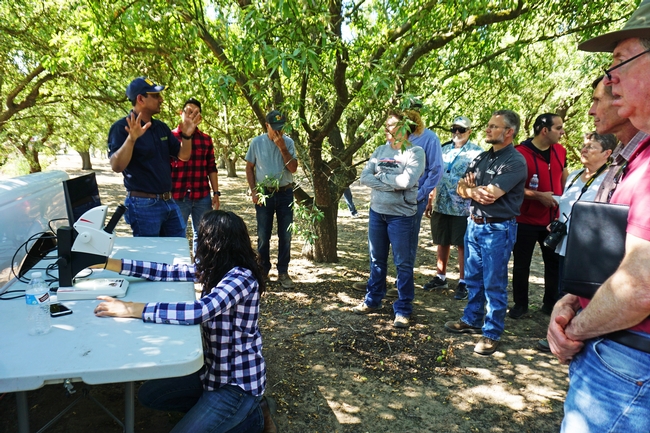 Rijal set up a microscope with an oversized monitor in the field to show participants insect details.

Rijal hosted a gathering of farmers and pest control advisers Aug. 13, in the Turlock almond orchard to give them a first-hand view of the pest and the problems it causes.

BMSB are hard to find in orchards. They lay greenish colored eggs on the underside of leaves, typically in a cluster of 28 eggs. The majority of damage is caused by adults, which sting the hull with a needle-like mouth part to get to the nut. The sting can even penetrate the almond’s hard shell when the fruit is mature. 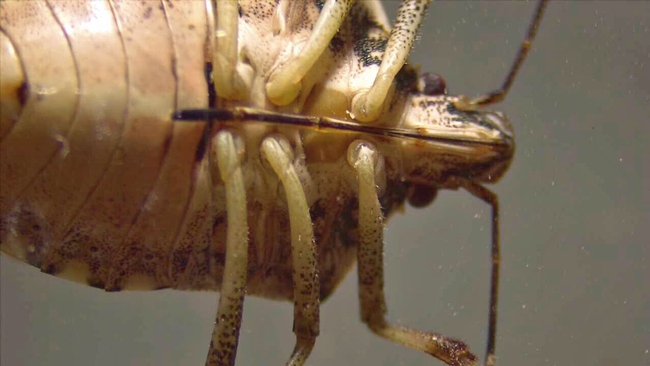 This photo of the BMSB’s underside shows the long, needle-like mouth part.

Globs of clear sticky sap appear on the damaged almond hulls, typically indicating nut loss inside. Early season (March-April) infestation leads to the most severe yield loss when the nuts drop to the ground. The best way to confirm the damage is caused by BMSB is to use a trap.

“I recommend growers and pest control advisors put BMSB traps in orchard edges if they suspect BMSB damage or if the orchard is located near potential overwintering structures or host crops,” Rijal said. “BMSB are good flyers and active throughout the season, damaging nuts from April through the fall. But the most substantial damage happens in the spring through early summer.” 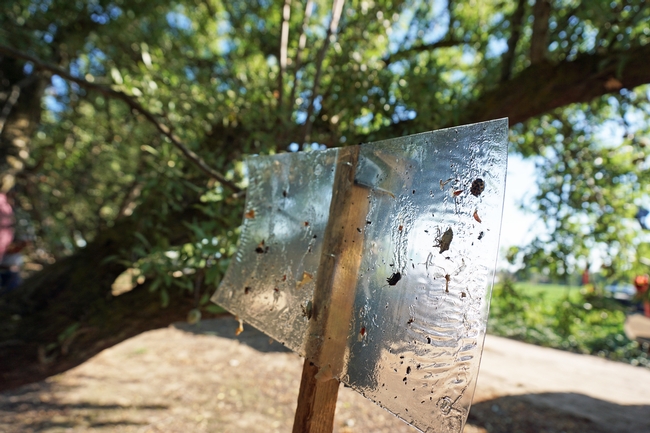 A sticky trap in the Turlock almond orchard contains a BMSB near the middle of the right side. The trap is placed next to trees, not in them, four feet off the ground. A commercial BMSB pheromone lure attracts the pest into the monitoring trap.
If the orchard is close to BMSB-favored host plants, more damage is seen. A particularly troublesome neighbor plant is tree-of-heaven.

“Tree-of-heaven is a magnet for BMSB,” Rijal said, pointing to an abandoned farmhouse site on an adjacent property. “Tree-of-heaven has a nice fruiting structure that can support a lot of BMSB.” 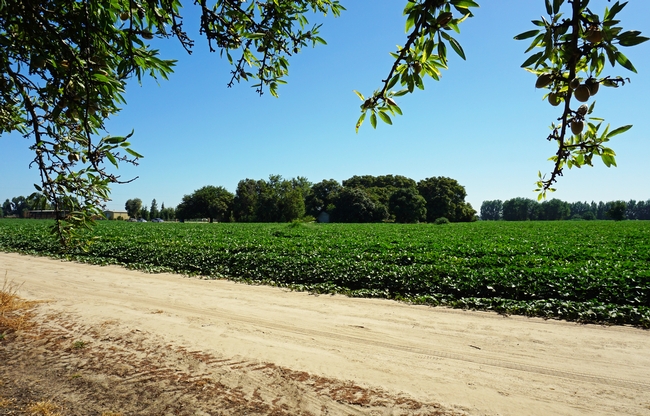 Adjacent to the BMSB-infested almond orchard, an abandoned home site is surrounded by an unmanged grove of tree-of-heaven, an invasive plant from Asia that is attractive to BMSB.

Also an Asia native, tree-of-heaven was brought to California by Chinese immigrants during the Gold Rush. The roots, leaves and bark are used in traditional Chinese medicine. But its rapid growth and ability to clone itself to develop thick groves make it a noxious weed.

BMSB isn’t a serious pest in its homeland because it is controlled by a natural enemy. Charles Pickett, the California Department of Food and Agriculture biological control scientist, shared a mounted sample of a Samurai wasp from Asia, Trissolcas japonicus, which lays its eggs in BMSB eggs.

“The parasite attacks most of the eggs in the field in eastern Asia,” Pickett said. “It’s our goal to release the wasp in California. We first need a special permit to make sure it won’t harm our environment and doesn’t attack any beneficial stink bugs.”

The Samurai wasp has already found its own way to some BMSB infestation sites in the Eastern U.S. and in Los Angeles.

“We hope to someday release the parasitic wasp,” Pickett said. “It won’t eradicate BMSB, but it will help.” 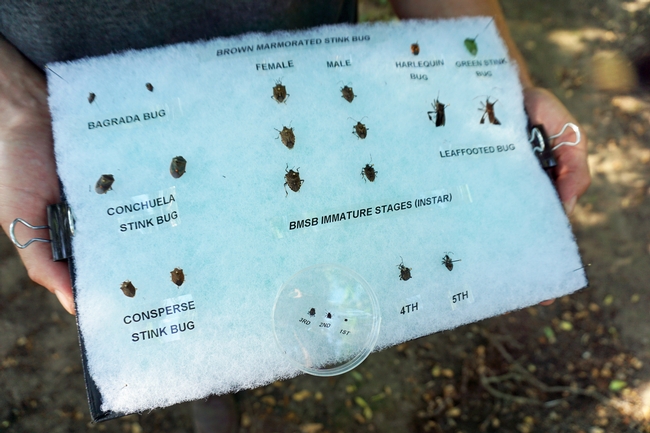 An insect display enables field day participants to compare insects commonly found in orchards. BMSB males and females are in the center. 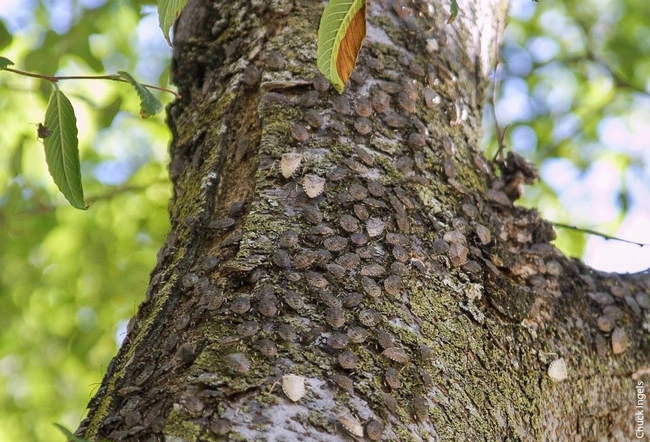 A 2013 photo shows a tree in midtown Sacramento where BMSB aggregated.
Established populations have been found in residential areas of 16 California counties from Butte and Glenn counties in the north to Fresno in the south. A population has also been found in Siskiyou County.
In the one-minute video below, Rijal explains the scope of BMSB infestation in California:
– Jeannete E. Warnert, University of California Cooperative Extension
Photo at top: UCCE Integrated Pest Management advisor Jhalendra Rijal addresses farmers, pest control advisers and UC Master Gardener volunteers in a Turlock almond orchard. Photos: Michael Rosenblum/UCCE Stanislaus County
Tags: nuts