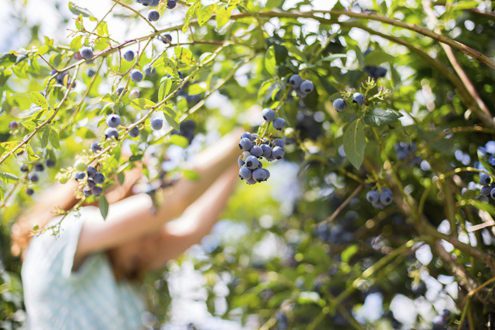 The best type of irrigation approach for blueberry fields depends on what the grower wants from the irrigation system.

Trickle irrigation. The system is more inexpensive but provides a slow application rate.

“You don’t have to test the water, but it’s hard to catch up if you fall behind and you don’t have access capacity in your system,” Longstroth said.

Most growers prefer two irrigation tubes for spacing, rather than one, so there is water provided to both sides of the plant.

“You want as many emitters close to the plant as possible,” he said. “Emitter size (determines) how much water it is putting out with the pressure that you have. Normally, the application rate is measured in gallons per minute and gallons per hour that that emitter will put out in a specific range.”

Soil texture influences water movement in the soil. Water spreads out in heavier soils, and moves quickly down in sandier soils.

“You should look at wetting fronts. Dig a hole around one of your emitters after it has run for a while to see where the water goes. Does it shoot out, or does it go right back down into the sand?”

“It’s really easy to over-irrigate,” Longstroth said. “You may say I’ve got to put on a lot of water. You’ll turn the trickle irrigation system on and let it run for five or six hours and three-quarters of the water has gone below the roots. You’d be better off cycling your different zones.

Water quality also is an essential consideration for growers, who should monitor it closely. Blueberries are sensitive to salts, Longstroth said. Biocarbonates of calcium and magnesium will increase the soil pH.

“If you’ve got hard water, you have a fair amount of calcium and magnesium in the soil. When you trickle irrigate, you are going to be liming the soil. I’ve had people with trickle irrigation systems say the more I water, the crappier they look. Often, they have a fair amount of calcium in that hard water. In those cases, you probably want to look at the quality of your water; what are the salts in the water? Typically, calcium and magnesium in the water will raise the pH of the water, over time raising the pH of the soil.”

Longstroth knows of growers that will add acid to the water to bring the pH down as they trickle irrigate.

Sprinkler irrigation. These systems are expensive and require putting a lot of water over the entire acreage, not just on the plants. It can also be used for frost protection under the proper conditions.

“You can use it for evaporative cooling,” Longstroth said. “The big disadvantage is if you’re pumping out of a surface pond or surface source of water, you have to have the water tested for food safety and figure out whether or not you can or can’t irrigate. There’s also the problem, perhaps, of washoff of SWD (spotted wing drosophila) insecticides.

“Sprinkler irrigation is based on what your nozzle size is, what your sprinkler pressure is, and how far apart the sprinklers are,” he said. “Your application rates are usually measured in inches per hour. For a certain type of sprinkler, we use 9/64ths and run it about 45-50 pounds. So we’re putting out 4 to 4.50 gallons of water per sprinkler. I use a slide rule to do all of this. My sprinklers are spaced at 40 by 60, putting on .16 of an inch of water per hour.

“You should check those rates, not just at the nozzle, but at the pump,” he said.