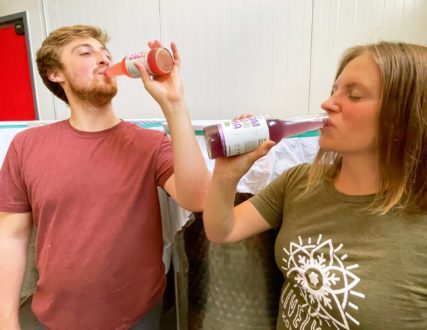 The community college in the Michigan town of Muskegon is hedged about with fruit and vegetable farm operations.

Blueberry farms and apple orchards dot the countryside, with major production areas in Sparta (apples) and South Haven (blueberries). To the north is Oceana County, the self-proclaimed “Asparagus Capital of the World.”

A little farther north is Traverse City, “Cherry Capital of the World.” Just 20 miles east of the Muskegon campus is Swanson Pickle, a large processing operation that draws cucumbers from roughly 3,000 acres each season.

And now on that campus, there’s a new tool for these growers and the entrepreneurs who work with them: 8,000 square feet for developing value-added produce products and ag technology and scaling them up to the commercial level.

Called FARM for food, agriculture, research and manufacturing, the facility is a project of the West Michigan Food Processing Association (WMFPA), Muskegon Community College and the Community Foundation for Muskegon County. WMFPA was formed in October 2017 to bundle “existing local agriculture attributes with the benefits of expanding regional food processing capabilities.”

“As an educational capacity builder to help small businesses prosper and learn and build their own capacity before they go to their own facility, and to help large companies, large fruit and vegetable companies, with new product trials, and new innovations, is really the focus of FARM – new products and new ag technologies,” said Marty Gerencer, executive director of the WMFPA. “This isn’t a place you would come to for five years – maybe a year at the most.” She added there’s also a teaching function of the facility – there’s a cement pad with hookups for Michigan State University’s Mobile Food Processing Lab, a big trailer that travels between campuses.

For the commercial tenants, three bays in the facility are mostly the same, each with about 2,600 square feet of space. The “front” of each bay has an office, locker room, area for personal protection equipment, a produce-washing station and restrooms. A large production area has about 1,600 square feet of space. At the back of the building is a loading area with two large coolers each capable of holding 2,600 pounds of product.

Gerencer said the first two tenants are mostly bringing their own equipment.

“However, for the fruit and vegetable industry, we hope to work with Michigan State University to identify equipment that just needs to be here,” Gerencer said. Machinery to make purees for farm-market standbys like jams, or possibly baby food, is one example.

The facility is an opportunity for growers to experiment.

FARM is for both small and large business ventures, she said, and both are hoped to make use of the facility. Some smaller tenants might choose to rent for just a couple of days a week.

Among two of the initial tenants is Zack Smith, owner of the Lively Up Kombucha. Smith said he’s able to source produce – fresh and in season – from local farmers. His “Blueberry Harvest” flavor of the brew features berries from Sodini Farms north of Muskegon. He also works with Tortise and Hare Farm in Muskegon, Mclaughlin Grows Urban Farm and Lake Effect Apiaries in Mears, Michigan.

“We work with local farmers whenever fruit is in season,” he said. Frozen produce works in the off-season.

For the first 2.5 years of running the business, he had another job while running the company. Now, he has three employees, not including himself. Before FARM, he was crowded into an 800-square-foot commercial space. Without the chance to scale up, he probably would have had to turn down sales, he said. Distributed by Cherry Capital Foods, he’s now in more than 100 stores in Michigan, including the Whole Foods outlets.

“FARM is that opportunity for us to continue that dream … that stepping stone to a whole new level,” he said. “It’s already been a month (here) and we’ve already increased our volume three times.”

Kaja Thorton-Hunter is the owner of Kaja’s Flavor Packs, spice mixes she blends herself. A Michigander, she developed a taste for southern spices while studying and living in Savannah, Georgia.

After returning to Michigan, she continued to cook in that Southern style. “I used to grow my own peppers,” she said. Her crab boils became something of a community event, at one point attracting about 200 people to her home for the spicy food.

Starting a small business, she said she’s now in some local shops and got the opportunity to get into the large retail chain, Meijer. Increasing her production level is important, and the FARM facility will help her do that – she received the keys to the space in mid-June and hopes to move some spice auger equipment there soon.

“It’s an opportunity to scale to places we don’t even know yet,” she said.

– Stephen Kloosterman is the associate editor of Fruit Growers News.