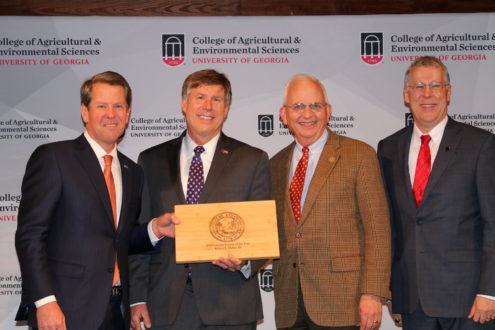 Crawford County peach farmer Robert Dickey has been named the 2019 Georgia Farmer of the Year.

A fourth-generation farmer, Dickey manages approximately 1,000 acres of peaches and 3,000 acres of timberland with the help of his 90-year-old father, Bob Dickey, his wife, Cynde Dickey, and their son and daughter-in-law, Lee and Stacy Dickey.

After high school, Dickey’s father encouraged him to pursue a business degree, so Dickey enrolled at the University of Georgia, graduating in 1976 with his bachelor’s degree. However, banking jobs were scarce, so Dickey returned to the farm with a new perspective.

“Although I had worked on the farm through my high school and college years, I did not fully appreciate the value and significance of my family’s heritage until I came back full-time,” Dickey said. “There are no words to fully express the feeling of working alongside my father on the land my great-grandfather, and namesake, initially planted in peach trees in 1897.”

Dickey has made many changes on the farm while honoring his family’s farm history.

When he noticed other peach farmers were planting more acres, and Dickey Farms’ production volume left the farm’s packinghouse sitting underutilized during the season, Dickey began to offer packing services to meet other local farmers’ packing needs and to generate additional income.

To deal with drought conditions, Dickey invested in irrigation equipment and added lakes, wells and piping which “helped immensely,” he said.

Over the past 10 years, the farm transitioned to low-volume drip irrigation from high-volume reels of irrigation hose to increase efficiency and lower the farm’s water and energy use. Peach yields are up and disease pressure is low.

The peach trees are still planted in traditional rows, but the areas between the rows are intentionally maintained in sod. This environmentally friendly practice prevents soil erosion, provides traction for farm equipment, adds organic matter to the soil, improves soil moisture and provides habitat for beneficial insects.

Following recommendations from the U.S. Department of Agriculture’s Environmental Quality Incentives Program (EQIP), Dickey reduces scale on his peach trees by using oil instead of a chemical treatment. The farm engages in crop rotations with a local row crop farmer to improve soil fertility and structure and reduce compaction.

Dickey manages the family’s timberland with the help of a registered forester and the Georgia Forestry Commission, and they continue to plant new and improved second- and third-generation loblolly pine seedlings.

“Dickey Farms is deliberate in our planting of wildlife habitats,” Dickey said. “Although we don’t want deer and other animals in our (orchards), we welcome wildlife in our forests and timber areas. Hunting and fishing leases are an important part of our farm.”

The farm business recycles all of its cardboard, newspapers, plastic and glass through the local recycling center and makes a point to also recycle all pesticide containers, oil and tires.

Dickey’s father continues to be a part of the farm business. “He’s the farm’s biggest cheerleader, encourager and mentor for both me and my son,” Dickey said. “His memory is amazing, and he has witnessed some of the biggest changes in the industry.”

Dickey has taken the farm into new areas with ideas from his children and insight from his wife,  Cynde Dickey, the farm’s chief financial officer. She was instrumental in starting the farm’s retail business and mail-order operation, which began 25 years ago.

“She realized how much friends and families who no longer live in Georgia would love to have our juicy Georgia peaches arrive at their doorstep,” Dickey said. “Our retail operation has increased dramatically over the last five years as customers realize the value of purchasing their peaches and produce straight from the grower. The sales are steadily increasing in our non-peach production months and our ice cream is famous in these parts.”

Dickey’s peach crop is marketed through the Genuine Georgia Group, a sales and marketing team with an interest and deep roots in the peach business.

“This gives them a deeper understanding of production, quality, harvesting and marketing concerns,” Dickey said. “We want our peaches to be known as Georgia peaches — the sweetest peaches in the country.”

Daughter-in-law Stacy Dickey promotes the farm’s market through social media, employee training and advertising. The Dickeys’ daughter, Marjie, a 2013 graduate of the UGA College of Agricultural and Environmental Sciences, develops new recipes for the farm’s bakery. School groups often visit the farm for educational field trips, which are now in high demand.

Son Lee Dickey manages the farm’s food-safety program and the installation of new peach trees and new crops, like 100 acres of pecans and 2 acres of strawberries. The farm plans to expand its vegetable acreage to meet the local school system’s demand for Georgia-grown produce.

“When Crawford County lost its only grocery store in December 2016, Dickey Farms stepped up and provided fresh produce in season to meet the county’s needs,” said Sarah Greer, the UGA Cooperative Extension Agricultural and Natural Resources agent in Crawford County.

Greer nominated Dickey and his farm for the Farmer of the Year award.

“Dickey Farms exemplifies all that it means to be a steward of the land. They are innovative and progressive,” she said. “Not only are they an amazing farm that has persisted over generations, but they are outstanding community members.”

In addition to his work on the farm, Dickey is serving his fourth term in the Georgia House of Representatives for District 140, which covers Crawford County and parts of Bibb, Houston, Monroe and Peach counties. He represents his fellow farmers on the House Agriculture and Consumer Affairs Committee.