The robot weather station north of Richland Center, Wisconsin, stands sentinel above the deer fence of an apple orchard in the hills near Hell Hollow Road in Richland County.

The device, a 21st-century enhancement of the ancient weathervane, is measuring wind, rain, humidity, temperature and sunlight duration and intensity.

Installed this spring, the weather station is part of a system aimed at advising owners of the 180-acre, family-owned Oakwood Fruit Farm about a number of critical procedures – think pruning, irrigation and pest control –  needed to bring in a bountiful, healthy crop.

One crucial decision concerns timing a treatment that will eliminate more than three-quarters of the tiny fruits, said Amaya Atucha, a UW–Madison Extension fruit crop specialist who has been introducing the new technology since she arrived at Madison three years ago.

Without thinning, the trees will be over-taxed and underproductive. Roughly speaking, about 80 percent of the flowers must be removed, a difficult hand-work task. 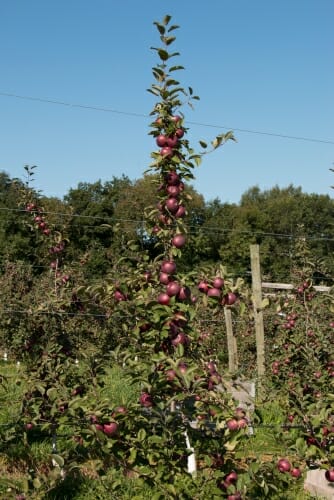 “High density” planting of apples, a production system developed through the last 20 years, “has changed the way we produce fruit in a dramatic way,” says UW–Madison extension specialist Amaya Atucha, leading to what is called a “fruit wall.” Fertilizer, irrigation and spraying are all weather dependent, she says. “Part of my job is to help growers implement these new technologies. Photo: David Tenenbaum

Thinning is necessary, but the timing and intensity are both tricky, says Steve Louis, one of the family’s fourth-generation of apple growers. “There are so many things that go into knowing when it should be done, and how much thinning we need.”

Optimal thinning varies with the apple variety, temperature, sunlight, and the short-term weather forecast. You would be hard-pressed to find fruit farmers in Wisconsin with much more experience than the Louis family, yet even for them, “the equation is complicated, and we were always guessing,” Louis says.

The weather station is part of the Network for Environment and Weather Applications. Like 30 other stations at Wisconsin orchards and vineyards, this one links wirelessly to software that makes calculations and recommendations for each location, using a suite of tools and apps.

System data is available publicly, Atucha says, though closer is better, as subtle variations in conditions can have a big impact.

“NEWA takes a lot of the guessing out, “says Louis, who began using it this spring. The warm spring “was one of the of scariest, with the high temperatures, it would have been easy to over-thin, had we not had the model that said to decrease the amount of thinner we applied.” 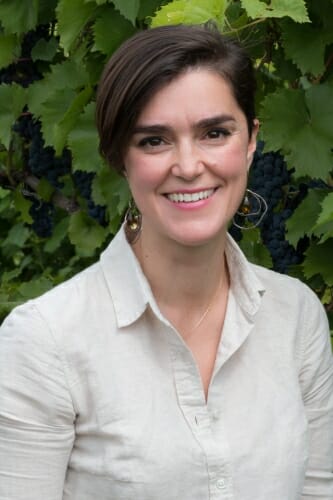 Amaya Atucha, assistant professor of horticulture and extension fruit specialist, has introduced a scientific approach that bases management decisions on weather conditions to Wisconsin. The technology was developed at Cornell University, where Atucha got her horticulture Ph.D.  Photo: Sevie Kenyon

Thinning is based on an understanding of tree metabolism, especially the carbohydrate stores. Thinning also secures a return bloom the following year.

To assess the results, Atucha has students working at Oakwood this year, doing the tedious but necessary job of counting flowers and fruit.

NEWA helps for a lot more than thinning. “These tools/apps, based on computer models, are designed to aid farmers in the use of integrated pest management and best management practices in a crop-specific and location-specific way,” Atucha says. The data and associated software can also support decisions on pruning and treatments for fungus and insects.

Louis says NEWA has already helped with irrigation. “There were times when it seemed like the soil was starting to get dry, but the NEWA moisture probe said we were good, so we only irrigated three weeks, purely based on that.”

Collaborating with UW–Madison is nothing new at Oakwood, says Louis, who, like his father, has a B.S. in horticulture from Madison. Extension experts help the Wisconsin Apple Growers Association set up the state summer field day, and growers rely on insect expertise from Professor Christelle Guedot and on disease knowledge from Professor Patricia McManus. 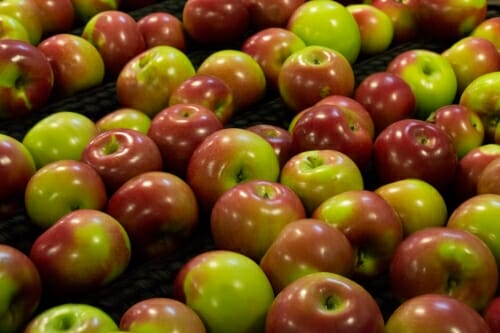 As the fall harvest proceeds, job #1 is getting the crop out of the rain and into the cooler, says production manager Steve Louis. Photo: David Tenenbaum

University expertise is available by phone or email, Louis says. “Typically, we may have ideas about something we’ve heard at a meeting in Michigan or Washington State, and we’ll inquire how we can apply it here. If they don’t know the answer, they can go and find it. We get to talk to those who have the expertise, and we’ve seen great value in the things they can bring.”