Trade and production of blueberries is expanding globally as product development boosts their profile in form and function. Hailed for their flavor, versatility, and health benefits, blueberry consumption has expanded beyond fresh, ranging from pureed to powdered forms. Blueberries are also being used as ingredients and additives in foods and beverages.

These new uses and forms of blueberries are combining with increasing fresh consumption to drive up production worldwide. Global production and trade have seen the most dramatic growth between 2010 and 2019, driven ever higher by mounting consumer demand. 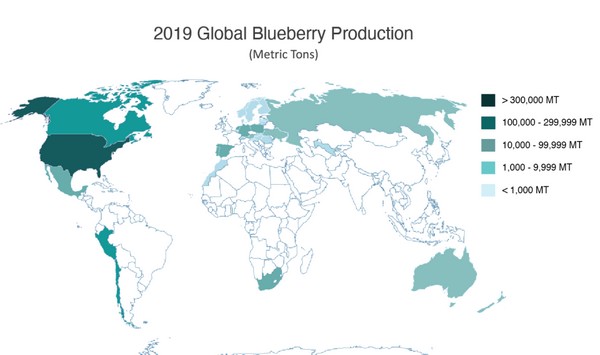 Map Showing blueberry production by country.  Most of it is in North America with the U.S. being the highest producer.

The number of countries producing at least 10,000 tons started increasing by 2012 and has not declined since then. By 2019, at least 11 countries were above the 10,000-ton threshold. Peru had the most dramatic expansion, rising from less than 50 tons to nearly 125,000 to become the fourth-largest producer behind the United States, Canada, and Chile. Peru is now the world’s leading exporter by value.