The sight is every winemaker’s nightmare.
“Smoke-tainted” grapes, blackened casks of wine, charred and broken bottles where once there were picturesque vineyards.

In California’s celebrated Napa Valley, instead of welcoming visitors to their wineries for the autumn harvest season, winemakers this year are looking at decimated vineyards.

According to an Oct. 11 CNN story, Massive wind-driven wildfires have damaged and destroyed dozens of the region’s famed wineries, many of them family-owned businesses.
And the coronavirus pandemic hasn’t helped either.
Coupled with the wildfires, high temperatures and weeks of smoky skies, there have been very few visitors to the area this year, several winemakers tell CNN.
The California wildfires have devastated more than four million acres, of which the Glass Fire has scorched more than 67,000 acres, damaging and destroying structures at approximately 30 wineries in Northern California. 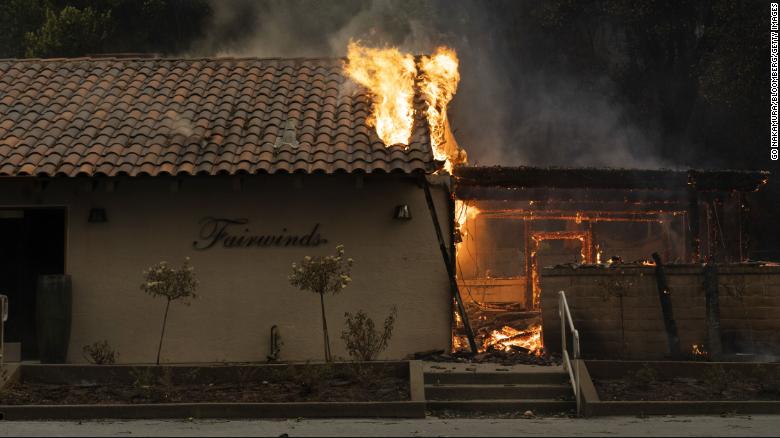 But despite major losses, some Napa Valley winemakers say they hope to attract visitors soon to uphold the region’s reputation for making some of the world’s finest wines.
Fairwinds Estate Winery is one of them. The historic property known for being the fourth winery established in Napa Valley shortly after prohibition, has been nearly destroyed by the Glass Fire.
Over 40,000 square-feet of production facilities and a tasting room were completely gutted. Hundreds of bottles of wine were cracked in the heat of the flames, and tanks of unused wine have been damaged beyond repair, said Brandon Chaney, proprietor and CEO of Fairwinds Estate Winery.
A four-man firefighting crew with the Fremont Fire Department tried to salvage as much as they could. But after a hydrant lost pressure and their pumping systems burned, the firefighters were forced to evacuate. They did, however, manage to save an American flag flying on a pole high above the flames engulfing the property.
“The firefighters felt like they were responsible they couldn’t save the winery, but I was so moved they have the pride in their country to save our American flag and give it back to us so we can put it up again as a symbol of rebuilding,” Chaney said. 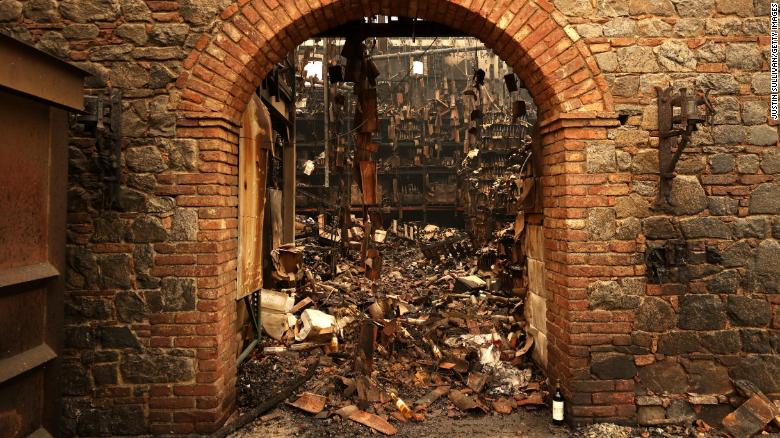 Also according to the CNN story:
Other winemakers in Napa Valley are facing the same devastation.
The neighboring Castello di Amorosa winery in Calistoga said it lost an 11,000 square-foot building and nearly 10,000 cases of wine — that’s about 120,000 full wine bottles — in the Glass Fire.
Dario Sattui, the owner of the property, said the destruction from the fires will not stop them from reopening their “castle-like” tasting room.
“It’s a really difficult situation for us because we sell about 95% of our wine direct to the consumer who comes to the winery,” Sattui said. “So, when we don’t have visitation, we don’t have sales.”
Sattui said Napa Valley winemakers have encountered constant hurdles with wildfires since 2018 that have been a “disaster” for smaller family-owned wineries that do not rely heavily on online sales.
For the entire CNN story, visit here.
Photo at top: The Glass Fire has destroyed several Napa Valley wineries. Photo: CNN