According to a report from USDA’s Foreign Agriculture  Service, world peach and nectarine production is forecast down 1.1 million metric tons to 21.0 million as adverse weather conditions impact output in top producers China and the European Union.

Global trade is expected to contract on reduced global supplies. China production is expected to decline 500,000 tons to 14.5 million due to heavy April snow that impacted fruit set in most peach-growing prov inces. Exports are expected to drop one-third to 80,000 tons as Russia continues its ban on imports of fruit from China, including stone fruit. China’s third-largest market prior to the ban, Russia initiated the action in August 2019 due to phytosanitary concerns.

China’s imports are forecast up over 40 percent to 38,000 tons, reflecting a strong jump in supplies from Chile at the beginning of the marketing year before COVID-19 disruptions impacted shipments. EU production is forecast to fall over 600,000 tons to 3.5 million following last year’s near record supplies, as a variety of damaging weather events affected output in leading producers Spain, Italy, Greece, and France. Surplus peach production over the last several years has also prompted reductions in planting area in Spain, Italy, and France, with Spain shifting some production towards tree nuts.

Exports are expected to ease 4,000 tons to 67,000 on lower shipments to top markets Mexico, Taiwan, and Australia. Imports are also anticipated lower to 33,000 tons on reduced shipments from Chile in the beginning of the marketing year. The United States is now eligible to export nectarines to China, per the U.S.- China Economic and Trade Agreement signed in January 2020.

World Markets and Trade Turkey production is anticipated up for a sixth straight year of growth, rising 40,000 tons to 870,000 on good weather during bloom and harvest. In line with production, persistent growth also marks Turkey’s exports. Higher supplies and less expected competition in Russia due to the absence of China is expected to drive exports up 40,000 tons to a record 140,000, nearly tripling in 4 years.

Export success is in turn spurring further investment in production, prompting continued expansion in planting area to meet export demand and a growing juice industry. Chile production is expected to see a small rise to 170,000 metric tons on good growing conditions and stable planting area. In line with production, exports are expected to see a slight improvement to 105,000 tons on higher shipments to China.

Japan production is forecast to continue its downward trend, eroding 10,000 tons to 98,000 on an extensive rainy season. If realized, this would mark the first time in USDA’s production, supply, and distribution database that Japan’s production has been below 100,000 tons.

Australia production is projected up 5,000 tons to 120,000 on adequate winter chill and good water supplies. Australia production has been experiencing a modest upward trend since 2017, which is expected to continue in coming years as older trees are being replanted with newer higher-yield varieties.

Despite higher supplies, COVID-related air freight challenges are expected to lower exports to 13,000 tons while boosting domestic consumption to 109,000. Russia imports are expected to halt their 2-year decline, recovering slightly to 200,000 tons as higher shipments from Turkey more than offset losses from banned China supplies.

Data Changes: “For Processing”: data for this consumption attribute is no longer collected or reported due to concerns about its accuracy, and historical data was added to “Domestic Consumption” back to 1979/80.

World cherry production is forecast to rise 60,000 tons to 3.9 million as gains in Turkey, Chile, and China more than offset weather-induced losses in the European Union and United States. Higher output is expected to lift exports 17,000 tons to 503,000 on strong shipments from Chile and Turkey. 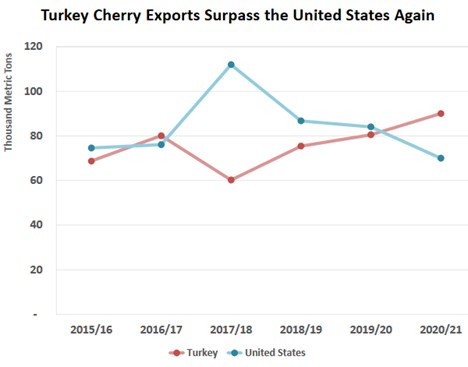 Turkey production is projected up over 70,000 tons to 918,000 on good growing conditions. Showing a sixth straight year of growth, producers are also transitioning orchards to high density plantings of high-yield varieties.

Larger supplies are expected to drive exports up to 90,000 tons on higher shipments to the European Union and Russia, surpassing the United States as the second largest exporter for the second time in 4 years. Turkey gained market access to China and South Korea in 2019, and while shipments to these countries so far have been minimal, they are in direct competition with U.S. cherries as shipments for both Turkey and the United States occur primarily between May and August.

EU production is expected to contract slightly, slipping 35,000 tons to 703,000 as frost and heavy rains in the spring affected output throughout most of the top growing Member States. Despite lower supplies, fruit quality is expected to be good, and exports are forecast to remain nearly unchanged at 8,000 tons. Imports are expected to rise 7,000 tons to 60,000 as reduced output encourages higher shipments from Turkey.

China production is forecast up 30,000 tons to 450,000, continuing its long upward trajectory as new plantings coming into production more than offset losses from heavy snow in April. Planting area also continues to rise though at a slower pace. Private companies have begun building greenhouse and open-field cherry farms across China for the high-end market with the aim of supplying the domestic market. In further efforts to improve domestic fruit production, China’s Chamber of Commerce signed a cooperation agreement with Chile for production and trade of fresh fruits. It includes an exchange in technology and technical expertise, such as Chile’s fresh fruit production practices.

Though the agreement does not specify fruit species, cherries will likely be included. As uncertainties surrounding COVID check consumer demand, imports are expected to ease 10,000 tons to 220,000, marking only the third time since 2010/11 that imports will have experienced a decline. U.S. production is projected down over 40,000 tons to 383,000.

For the full report, visit here.