On a sunny September morning, a group of workers harvest the first cranberry crop from the Wisconsin Cranberry Research Station near Black River Falls.

Originally purchased in 2017, it has taken years to renovate the marsh and establish vines donated by growers across Wisconsin. Much of the funding for the project came from private donations, as well as money from the U.S. Department of Agriculture’s Agricultural Research Service, or ARS.

According to a story by Wisconsin Public Radio, Construction on the station was completed in June and the marsh hosted a dozen research projects this summer by scientists from ARS and the University of Wisconsin-Madison. 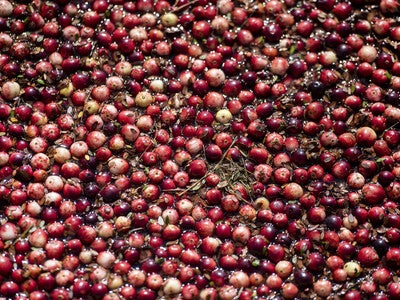 Tom Lochner is executive director of the Wisconsin Cranberry Growers Association, which manages the station. He said eventually, revenue from the station’s yearly crop will cover the operating costs and help to fund some of the research projects. This year’s berries were sold to Ocean Spray in Tomah, where they’ll be processed into dried fruit, cranberry sauce or juice.

Lochner said Wisconsin has hosted cranberry research for years, but the projects have always taken place on privately owned operations.

“Well over half of our growers have hosted some type of research project on their marsh. But there are certain things that researchers won’t ask growers to do, that’s going to cause permanent damage to their vines,” Lochner said. “So what we can do here is we can offer them a place where they can be fairly aggressive on some of their research.”

Amaya Atucha, fruit crop specialist for UW-Madison, said she and other researchers are grateful to the cranberry growers that let them host projects on their marshes. She said worrying about the crops was a common issue that held back progress.

“When we want to study things related to an invasive insect or a disease in which you really have to let that disease take over your marsh or your production bed, you’re not going to do that in a grower’s commercial marsh,because the grower makes their living out of the fruit,” Atucha said.

She said the station’s on-site lab will also allow scientists to be more precise, offering equipment and year-round staff to help collect data. A worker uses a blower to move cranberries away from the side of the bog Monday, Sept. 27, 2021, at the Wisconsin Cranberry Research Station in Black River Falls, Wisconsin.

Lochner said one of the big projects at the station is exploring the cold hardiness of different cranberry varieties. He said researchers are hoping to see what temperature the vines can withstand before growers need to turn on irrigation to prevent frost damage.

“That allows us to get a little bit better information,” Lochner said. “If we don’t have to turn the pumps on until it gets colder, that saves energy, it saves money, it saves water.”

He said the station will also focus on more targeted use of fertilizers and pesticides, another cost saving measure that’s also good for the environment.

Lochner said having good data on the benefits of new practices is essential to convincing growers, some of whom come from generations of cranberry producers, to change their operations.

He said the station will also host projects focused on breeding new varieties of the fruit and a food scientist to work on new products and food uses.