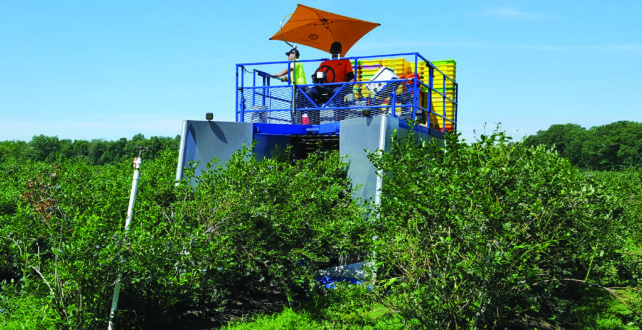 With new research on the way, and a promising crop in the field, it’s a good year to be a Michigan blueberry grower.

Halfway through the harvest season, all indications were for good total yields. Michigan’s spring rains make seasons more touch-and-go, so growers had to react quickly to protect their plants from disease.

“Harvest is going well,” said Kevin Robson, executive director of the Michigan Blueberry Commission (MBC). “This season, with all the rain that we had early on, for many other commodities posed a lot of problems. For the blueberry industry, our growers were definitely living in their sprayers, there’s no question about it, making sure that there was adequate coverage and making sure we’re providing a high quality of fruit to market.”

A good crop for Michigan is in the neighborhood of 100 million pounds per year, Robson said. The 2018 crop was only 68 million pounds.

At the same time, the MBC is making progress on several new initiatives designed to help its members. The commission is a legal entity formed by a grower-initiated process outlined in the Agricultural Commodities Marketing Act. In May 2017, growers voted to establish and fund the commission.

Creela O. Hamlin is a fifth-generation farmer who with her husband grows blueberries at Lake Michigan Berry, and while she was busy with the harvest in mid-August, she recounted how the commission had come together more than two years ago.

“As a group of growers, we saw a need for focused research that would directly aid Michigan growers, some of our unique growing circumstances, whether it be our soil types or replanting, varieties, pest issues – having really specific research to meet the needs of our industry,” said Hamlin, who is chairwoman of the board.

The commission gives growers a seat at the table when decisions are made, for instance, a search to replace a retiring Extension professor.

The commission collects an assessment from Michigan growers – 0.003 cents per pound on farms that produce 50,000 pounds or more – to raise money for the research, and that investment, in turn, helps prime the pump for other funding opportunities. Robson said the commission currently has more than $300,000 worth of grants and support disbursed, with over two-thirds of that amount being grant dollars that other granting institutions will repay.

Among the projects underway are a study by Michigan State University (MSU) entomologist Rufus Isaacs to research control of blueberry stem gall wasp, which seem to prefer Jersey, a cultivar that’s popular with Michigan growers.

“Our growers have had a tough time controlling that, eradicating it,” Robson said. No chemical sprays are available for control, and so many growers are going through plots and hand-pruning galls out of the bushes.

Other pathogens of concern to Michigan blueberry growers are spotted wing drosophila, mummy berry and phomopsis.

The MBC has made possible the funding of a new 3.5-acre research blueberry planting at MSU’s Trevor Nichols Research Center (TNRC) in Fennville. MBC provided a $30,000 match to a $99,300 Rural Development Grant from the Michigan Department of Agriculture & Rural Development.

“This planting nearly doubles the blueberry acreage at TNRC that is available for scientists to conduct research,” said John Wise, TNRC research and Extension coordinator. Many different MSU researchers, including entomologists, plant pathologists and weed scientists, will have access to the plot.

“For the last five years, we’ve needed to go off the research station and use non-commercial, privately owned blueberry patches,” Wise said. While certain kinds of experiments and trials can be run at growers’ farms, others cannot, for instance, pesticide trials that require a heavy proliferation of diseases or insect pests.

Wise said the soil amendments were incorporated last year. This summer, a contractor is installing planting beds, irrigation and the bushes – Blueray, Aurora and Elliott – will be planted in the fall.

In July, the MBC held a tour for EPA decisionmakers that included a demonstration of mechanical harvesting at Bodtke Farms near South Haven.

“That was something that these folks from the EPA have just never seen before,” Robson said. “They were so impressed at our diversity of agriculture. They really see how important the different labels are, and the work that they do. While it is so important for the sustainability of agriculture, they also got to see the real-world implications of the decisions they make. We were really proud of that.”

Above, the blueberry harvest in southwest Michigan. Photo: Mark Longstroth